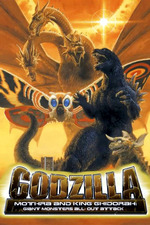 We have arrived at the New Millennium and Godzilla is back! Interestingly, this film seems to have dropped all the recent 80s & 90s stories to assert that Godzilla had appeared just once back in 1954 and then the military killed him, only for new reports of giant beasts to spawn rumors that giant monsters are returning to raze Japan.
I had a lot of fun watching this, as it tried its best to balance the warring ideas of "Godzilla is a scary monster" and "Godzilla is a force of nature." The redesigned suit is one of the more frightening ones I can think of: he's got NO pupils and his face has a permanent scowl. There's a shot of Godzilla appearing over a hill that's got to be an homage to his first appearance in 1954 and it's effective in making him look like a menace.
I also appreciated how much heart this movie has. There's a father/daughter relationship at the center of this story, and both of them are adults with jobs to do and clear motivations. There are no subplots about terrorists or space aliens this time around, and it makes for a stronger story.
The weaker elements of the film date the film in a bad way. There's a lot of talk at the beginning about "young people" which comes off as paranoid hand-wringing; after the 1990s saw Japan lose much of its luster in the post-bubble era, there was clearly a sense that "young people" were somehow responsible for the problems the country had, so this movie features lots of angry, wild youths who just go NUTS and commit crimes for fun.
Here's a real sequence: college kids are partying on a beach and then rob a store for more refreshments. A dog barks at them and this makes them so mad they decide to MURDER it. And not just a crime of passion, but a premeditated "let's abduct the dog in a box and steal a boat and then DROWN IT" scheme??? The dog ends up saved when a monster appears, but I couldn't believe the escalation.
Also, there's some digital effects work in this movie which I would generously describe as "good Dreamcast game" that looks awful twenty years later. Thankfully, the monsters are all authentic physical creations and they look fantastic, leading to a tremendous battle at the end.
I watch these movies as both entertainment and as snapshots of the era in which they were made, so this movie delivered on both fronts. I recommend it!