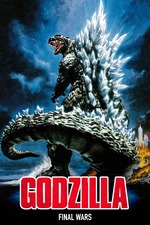 I've been making my way through decades of Godzilla films this year and this is one of the dumber ones, an extreme product of its era that leans heavily on The Matrix for inspiration yet looking cheaper than a student film at times. The colors are all...off, somehow, and despite being less than 20 years old and ostensibly made during a time when DVD would be big, this movie instead has a crappy late-80s VHS feel that I couldn't unsee. I know Japanese studios can't spend money like US studios but damn, Toho, this is your "50th anniversary" celebration?
Having said ALL that...this movie is fantastically awesome.
No, really, I can gripe about a lot of things (seriously this movie does not LOOK good for its age) but Godzilla Final Wars does not care. People have Matrix powers now for no reason. Aliens come to earth and look like us, but then they secretly don't, but then it doesn't matter. Godzilla is a menace and then he's trapped and then he's free and then he's almost immediately on our side. It's so much fun that none of these count as genuine complaints.
Final Wars is so entertaining and relentless in its nonsense that I will even forgive it for shoving Miniya into the movie (and a kid, of course) for a side-plot that goes absolutely nowhere. Can you still call something "fanservice" when the character has no fans? I guess someone in Japan must love that weird little beast but I'm at a loss.
I think Final Wars won me over during the credits when I saw Ryuhei Kitamura's name as the director, honestly. His work is definitely dated but he knew how to throw stuff at an audience and that's what so much of Final Wars is. Monster after monster, absurd concept after absurd concept. Mutants? Kaisers? Wait, monsters can be Kaisers? It doesn't ever matter, it's just fun. Don't skip this.