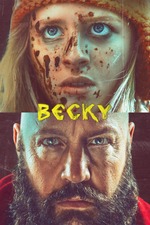 Recently, I was thinking it'd be really cool to see Kevin James do a serious role for once instead of playing the usual "it's funny because he's fat" parts in Adam Sandler comedies. Lo and behold, here's Becky.

James is actually not bad as a neonazi scumbag, but he starts to lose the intimidation factor once he gets repeatedly owned by badass, pint-sized (and most likely psychotic) Mackenzie Davis clone Lulu Wilson. It's really just a hyper violent version of Home Alone, and about as goofy as it sounds. I still have faith that James can pull off a really serious role. Hopefully he tries again soon.