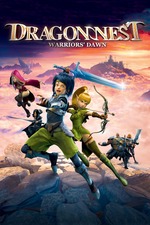 OK so I know nothing about the game this is based on and the sole reason I watched it is because I googled "Chinese animated movies" and for some reason the first result that came up was the sequel to this movie, titled "Throne of Elves". Being a connoisseur of elf content I needed to find out more, and discovered that that movie is about an elf lady fighting a dark elf princess who's trying to take over the world, the kind of prime content that I need in my life but that is sadly not available in quality fantasy movies.

I figured I needed to watch this one first - it does contain elves, after all - and it was exactly what I expected: graphics that would have been considered subpar in the early 2000s, an annoying protagonist who takes up way too much screentime, awkward voice acting (the king!), and the obnoxious, overly-long, bouncy, bouncy chase sequences and paint-by-numbers humour that you get in the worst of Dreamworks movies. Yet I still kind of enjoyed it because that's just how in need I am of dark elf content and dragon boys.