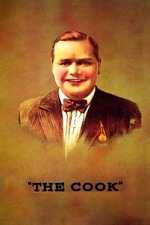 What the fuck was that?

Oooh, Arbuckle films frustrate me so much. They're so chaotic and not in a way that I enjoy because quite frequently I'm trying to work out how the hell one scene follows on from the previous.

This one started off so well and I was loving it so much, especially all the dancing -- Keaton you slinky beautiful creature, you can be my private dancer for all time -- and then that brilliantly surreal Arbuckle as Salome number. I was like, "Wait, is he doing Cleopatra or Salome? Whaaat is going on here? I don't know what it is but I love eet." Not to mention the mystical barrel that spat forth whatever Arbuckle needed in perfect presentation, and those glorious trick throws from him to Keaton. God, that was thrilling stuff.

But then it felt like there were some missing bits. First I thought it was just shoddy editing even though I haven't seen that with Arbuckle yet. But then no, definitely missing the bit with the bass/cello and the entry of Luke the dog. What a shame. I hope they turn up somehow somewhere during my lifetime.

The Italian bit was just painful. Especially since I had a huge dish of boscaiola penne today so I was really not impressed by all that waste of good pasta. Only slightly redeemed by Keaton's lightning fast laugh. How it changes his face entirely and curves his mouth and slants his brows in such strange elfin shapes. And yes, I totally caught him almost breaking a smile at Al breaking bottles over his head. Lunatic.

I absolutely hated the second half. What a waste of Al St John and Luke the dog. Though admittedly the sight of Al running up the entire incline of the rollercoaster followed by Luke was pretty impressive. But nah, that second reel had me bemused and unimpressed.

What a shame times two. Still worth it for the first reel. I wonder what the bass/cello gag with Keaton was. Maybe Luke shot out of it. Ha. No.

I can't believe I only realised last week or the week before why Keaton's trousers and suspenders are always so rakishly lowslung in the Arbuckle films. It's not a rake thing, it's THE CLOWN thing. Ermagerd, der. Keaton the vaudeville clown.