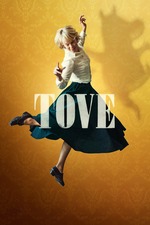 What a great biopic about Tove Jansson, the creator of the Moomin characters.

The film focuses on a specific era of Tove's life; she has already started to draw the Moomin characters but is still striving to become a "real" artist and painter. The film depicts beautifully the post-war artistic scene and of course the problems of being homosexual at that time.

I was waiting for a film that would have explained more about how she came up with the different Moomin characters, and maybe about her relationship with Tuulikki Pietilä. Instead, the whole later part of her life with Pietilä was left out, and the film focused mainly on her first romantic relationship, Vivica Bandler. Bandler's input on some Moomin characters was revealed, but other than that, Moomins were left out of the picture. And maybe that was for the better, because Tove's evolution and young adult years had enough of a story to tell on their own.

I'm not claiming to be an expert on Jansson, but I was suprised how little I actually knew about her. I had no idea that she almost married a man, had this whole passionate relationship with Bandler, was considered so much inferior to her father by both others and herself, didn't consider herself as a real artist, made comic strips to a world wide English-speaking audience etc.

The movie felt real, and the actors were all great and not too often seen in the Finnish cinema (with the exception of Krista Kosonen). Especially Alma Pöysti with her delicate impressions gave a world class performance. I liked the fact that the film was accurately in Swedish (Finnish Swedish to be more exact) and it didn't try to teach any lessons: it just told the story of this young artist not willing to fit any preconceived ideas in an unsensational way.