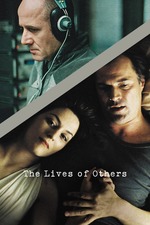 A Stasi agent starts questioning his motives and the whole system listening into a life of an artist couple.

The most impressive thing about this film is everything that's based on true events. I can't begin to grasp that many of my German friends have lived (at least a part of their childhood) during this very disturbing time in German history. Heart-wrenching.

Some people have said that this film shows that people can't change. I don't know about that, but at least this film argues the contrary in my opinion. All of the main characters believe in "the system" in the beginning. They have their own ways of viewing life and reacting to things happening around them. But little by little, the atrocities around them awaken like an innate urge to act on what they feel is right. Many of the side characters however seem to be total sociopaths.

Towards the end the film changed into something a bit too idealistic and the ending was maybe a little sappy but I can't deny that it still touched me profoundly.