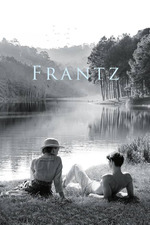 Frantz is a film about a German woman Anna who is grieving the loss of her fiancé Frantz in World War I. A Frenchman Andrien comes to visit Frantz's grave and narratives and emotions get tangled.

It was a difficult and bitter time in history between the French and the Germans. The whole undertone of the movie is sad, and the fact that most of it is shot in black and white only underlines the austerity further. The only colourful shots are the short dream sequences that show how life could have been, in another space and time.

I love the main actors, and how they are able to convey the struggle of moving on after life-shattering events. And I especially love how I can never quite know in advance what Ozon hides up his sleeve. As I've already said in some previous review, there are not many directors who can so effortlessly shift from one film genre to another. Sometimes it works well, sometimes not so much but at least you can't blame him for lack of versatility. Frantz is by far one of his cinematically more ambitious and successful endeavours.

Throughout the film, I feel that there was not only the main narrative, but also several optional storylines that Ozon let the viewer explore. It was like a riddle that you were constantly trying to solve. There are homosexual vibes that lead you to believe in an alternative love story with hidden double lives. There are some hints that make you wonder if Adrien is possessed by Frantz and maybe this is actually a horror movie. There are also several scenes with serious bottled-up post-war rage and ever-present possibility of violence, during which you start fearing that the whole film will just collapse to a revengeful Tarantino-style bloodbath. Or maybe that's just me.

Anyways, regardless of it's serene and maybe even a bit boring surface, this film made me feel a lot of things that I didn't expect.