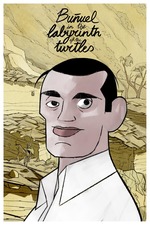 An animated film about the controvercial filmmaker Luis Buñuel and his psudo-documentary project about the isolated region of Las Hurdes.

The most important take-home message of the movie is that animation isn't just for kids and through it you can also convay a deep and meaningful narrative for adults. Many animations are primarily done to children but can also be appreciated by adults, but not this one. The animation gets cut by real scenes from the original mockumentary that contain i.e. cruelty against animals, so viewer discretion is advised.

Buñuel was a master of surrealism, and animation gives the movie more flexibility to mix realism and the director's dream/nightmare sequences. Death and meaning of cinema as an art form are some of the main themes throughout the movie.

I liked the fact that historical and cultural accuracy were respected as far as I understood it, and I liked the fact that for example the French characters spoke Spanish with a French accent. However, I don't feel like I had any new revelation or angle to Buñuel and his work itself.