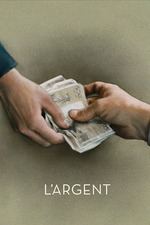 Based on a short story by Russian novelist Leo Tolstoy entitled "Faux Billet", L'Argent is Bresson's last uncompromising film which earned him the Best Director's Prize at the Cannes Film Festival, tied with Andrei Tarkovsky for Nostalgia (1983).

This time, Bresson's trademark minimalism becomes a neutral style that is more concerned with the moral implications of tragic misunderstandings and their irreversible repercussions rather than the grisly execution of the crimes. The level of score-less realism is somehow prophesying the future disturbingly quiet and engrossing lens of Austrian director Michael Haneke, moving from event to event with absolute confidence, like if the film had some remarkable level of self-awareness in the delivery of its contents.

Some melodramatic plot points indeed rise to the surface, but the low-key direction by Bresson keeps everything all the more realistic and interesting instead of clichéd. In this sense, just like Haneke, violence plays an important role in the story. Violence (both physical and psychological) is a consequence, the core of an unfortunate aftermath that was never called for. Alongside the aforementioned minimalism, the execution and the silence, when violence enters the stage, it speaks its statement in a shocking way and becomes all the more meaningful.

A great farewell of one of France's most influential filmmakers ever, L'Argent is a powerful commentary on moral implications portrayed as a chain of events that escape the extent of our judgments, and certainly an influential film to directors from Kieslowski to Haneke in all of its intentional nihilism.