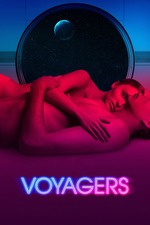 Voyagers is a science fiction film written and directed by Neil Burger and starring Colin Farrell, Tye Sheridan and Lily-Rose Depp. It’s effectively Lord of the Flies in space.

Set in the not too distant future, humans have discovered a distant planet which could serve as a new home for humanity. Thing is, it’ll take 86 years to reach it. The greatest minds of humanity decide they want to learn more about this planet and so agree to launch a scouting mission. For some reason that makes no sense to me, they also decide that this scouting mission needs to be manned.

The trip will take three human generations to accomplish and given that people familiar with all that a life on Earth has to offer might find the idea of spending the rest of their lives cooped up on a spaceship as a less than ideal situation for their mental health, a plan is devised which will see a group of children born into a controlled environment and raised specifically to undertake the first part of the mission. These kids will then grow up on the ship, procreate, have their kids do the same and the third generation will hopefully reach the planet.

Colin Farrell plays a botanist who gets close to the children whilst they are still on Earth and decides to tag along with them on their journey, pretty much defeating the point of using the kids in the first place, but whatever.

Anyway, the ship launches, we jump ten years into the future and now we have a ship full of eighteen years olds. These eighteen year olds are not like your normal eighteen year olds though, they are impeccably well behaved and apparently celibate. The reason for this is a blue drink that they all consume everyday which suppresses their more base human urges. Two of the crew, Tye Sheridan and Fionn Whitehead discover this and stop taking it. Whitehead then gets a bit rapey towards Lily-Rose Depp and is berated by Farrell. Farrell then has to go outside the ship with Sheridan to mend their communications array and dies after being electrocuted during the mission. Order on the ship breaks down, and all interest in the film’s story is lost as the plot descends into two groups of rampaging teens losing their minds and fighting for superiority.

To be honest I can’t claim I was all that invested in things even before the inevitable fighting started as the whole concept of the movie felt pretty dumb to begin with. I’m also not a particularly big Tye Sheridan fan, I find him to be something of a charisma vacuum. I didn’t like Fionn Whitehead’s borderline pantomime villain much either.

That’s not to say there wasn’t anything I liked here. The look of the film was pretty good and well realised. I liked the look of the ship, the visual effects were pretty simple but well executed and I’d happily watch Lily-Rose Depp in just about anything. That’s about it for the good stuff though.

The supporting cast contains a few familiar faces, the crippled Stark from ‘Game of Throne,’ is here, as is the English guy who gets strung up by the lungs in ‘Midsommar,’ and it was refreshing to see that future humanity was keen to populate our new home with a wide variety of races, even though pretty much everyone outside of the main three is storywise rather redundant.

This is a bit of a disappointing science fiction movie that had a potentially interesting, if a little dumb, set up. Ultimately though, it descended into a fairly predictable fistfight on a spaceship. The ending seemed a little too optimistic for me too as watching the remaining characters onboard the ship at the end I felt the mission was far more likely to end up being a sort of prequel for the Robert Pattinson sci-fi movie, ‘High Life.’ I didn’t enjoy that film much either. Or ‘Ad Astra.’ Shit, maybe science fiction is finally played out? Well, that’s a depressing thought...

I'll give it a star for each of Lily-Rose Depp's cheekbones...