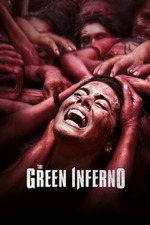 Eli Roth takes what made the brief cannibal sub-genre of Italian Horror from 30 years ago and completely misses the point of what made those films: they are ridiculous, over-the-top, violent, and most importantly, had a message in the end. The granddaddy of these movies, Cannibal Holocaust by Rugero Deodato, turns the tables and shows the media and it’s contortion of true events to be a truly savage act. Umberto Lenzi’s Cannibal Ferox makes its protagonists the joke, pointing out their own stupidity as to why they meet the fates that they do. The Green Inferno thinks it has something to say for 2/3rd’s of its runtime, ultimately giving us nothing in the end.

The story centers around Justine (Lorenza Izzo), a college freshmen in New York, who develops a crush on Alejandro (Ariel Levy), an activist leading an expedition to the Peruvian Jungles to combat corporations destroying the environment for profit, and in the process, killing the indigenous tribes. Once the team arrives and succeeds, their plane out of Peru crashes, stranding them in the middle of the jungle with no means of escape or contact with the outside world. Joining them are Alejandro’s girlfriend Kara (Ignacia Alamand), the timid and lovestruck Johah (Aaron Burns), and the rest are some degree of comic relief and false hope.

Roth gives us yet another body count movie filled with annoying characters, which isn’t necessarily a bad thing. This is a classic staple of slasher movies of yesteryear, as well as the Italian Cannibal films. Now, what sets this one apart, is that this does not change as the plot progresses. These characters are static, except for one: Justine. We root for her and hope she escapes as her partners meet gruesome ends. However, as her character does eventually reach a moment of enlightenment, if you want to call it that, the cast of characters seems to range from oddly funny to downright serious. This frequently throws a bizarre and unironic sense of humor into a film that believes ultimate message is darkly ironic.

What is ironic is that Eli Roth, a dedicated fan of the work of Lenzi and Deodato misses many things that made those movies an experience. First up, the music is all wrong. Manuel Riveiro creates a very obvious score with lots of tribal percussion and modern flare, a ho-hum staple that now plays in the background of every action movie that is set somewhere tropical. When the movie becomes too much, the music does nothing. It does not give humanity to the killings or remind us that the true villains in this movie are the main characters (for the tribe depicted in the film is going about their customs and culture).

Second of all, the film’s commentary on social activism is not what it seems. This is a case in which a twist of this nature is stupid and cynical. Worst of all, it destroyed the only element of the film I found to be genuinely sincere (besides the performance of the ultra-cool Richard Burgi). The one thing Inferno has going for it are the unknown actors in the cast. They communicate the torture, pain, and anguish of being eaten alive or having a horrifying stomach sickness about as well as you can without… Well, actually having it happen to you.

Worst of all, is the ending. Have we learned our lesson? Did we meet a character redemption worthy of having to sit through 100 minutes of an okay story, great special effects, and pretty decent acting (even with horrible CGI ants)? That is where divide will lie between those who dare see this film. Eli Roth’s movie was in limbo for quite about a year, not knowing if it would see the light of day due to distribution and content issues. But without a doubt is that shock value and a boring and predictable story, even by the Cannibal sub-genre’s standards, make The Green Inferno the most forgettable movie of the year.