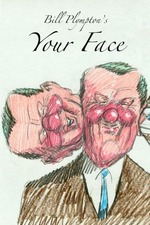 Who knew that animated shorts would make me want to never take any drugs except my prescribed medication. Step aside Florrie Fisher, if I ever see my friend's face bubbling out of their face in the middle of a conversation, I'm going to slap the hell out of them and explain later. Apparently the singer was a woman who had her voice slowed down in editing, giving it an unnatural, uncanny sound which only adds to the sense of nightmarishness. The song is completely banal, even offensively so, but you get the sense that this is Plympton's point. It's like Lynch if his sense of humour was more whimsical. The pencil drawing of the man singing is restlessly moving, sketchy, as if not entirely connected to the world around it, and that just adds to my anxiety. Still, unlike It's Such A Beautiful Day, at least I was able to watch this without having a full blown anxiety attack. Seriously, that film overwhelmed me to an extent that I had to turn it off after eight minutes. How do people finish that AND think of it as a transcendental experience is beyond me.

The Secret World of Arrietty