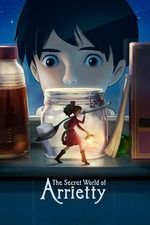 The Secret World of Arrietty

Fantasy on the smallest stage possible, maybe the lowest for any Ghibli fantasy I've seen so far. No cataclysmic tidal wave, no giant louses, no secret city. What you've got is two levels of a house, one occupied by a young boy waiting for a heart operation and his busybody nurse, and the other occupied by a family of tiny people who occasionally 'borrow' small objects from the big world. The entire action takes place in the house and its garden, and the 'villain' isn't really interested in getting rid of the borrowers, more just collecting them. The film is more interested in the relationship between Arietty and her above-stairs friend, one that does seem to be one of mutual attraction but that can never be fulfilled, for obvious reasons. It's a charming relationship handled with elegant sensitivity, though that's something that could be said of the entire film. The art is Ghibli's usual outstanding quality and the soundtrack is an interesting folksy affair based around two songs that have instrumental variations. Very attractive music, and I say that as someone who raises his eyebrows at folk usually. I saw my copy with the StudioCanal dub, which meant I got some fabulous English actors- Tom Holland, Mark Strong, Olivia Colman, and Saoirse Ronan pulling off an excellent English accent. Overall, a very solid entry in the non-Takahata/Miyazaki Ghibli canon.