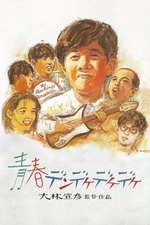 6th Nobuhiko Obayashi (after Hausu, School in the Crosshairs; His Motorbike, Her Island, The Girl Who Leapt Through Time and Tenkôsei)

Hello! If you're looking for nostalgic and heartfelt reminiscences of teenage rock exploits and awkward adolescent fumblings, then you've come to the wrong review. I get the sense that in the Collab, this will be the purview of older, sager fellows, such as Rem or Josh. Here on the Ethan Lyon account, we go in for film analysis and an appreciation of a director's unique stylings, and oh boy is Obayashi good for that. What I love about him is how unfettered by convention his imagination is. To the Western mind at the very least, his visual language is a completely hermetic universe informed by little more than his own lucid imagination. For Obayashi, the past is not just a timeframe but a physical space, something to be returned to over and over in the process of retrieving and reliving the pleasures of a life once lived well. Rocking Horseman, with its self-consciously past tense narration, fits nicely into this conception of subjective existence. Here, our protagonist narrates the film as his childhood self looking back on the time when he and his friends started the titular band and for a brief period of time, blazed a trail in his small sea-side town (another big Obayashi theme).

It's very clearly a subjective, nostalgic narration, one that emphasises not only how our protagonist acted but also felt. There's a number of wild fantasy moments where he imagines himself in various costumes (including a woman at one point!) to elucidate what the moment at hand would have made him do, had he not himself. There's certainly a slight sadness in our protagonist that he's never quite as brave as he could have been, especially in his interactions with the opposite sex, another element that frequently appears in Obayashi. Sadly, that's also the element which dates the worst, as Tenkôsei's latent homophobia rears its head in a couple of rather ugly scenes where homosexuality is used as a punchline to lure girls away from unwilling protagonists. Yet I do stand by my belief that there is a real sense of authenticity of the male teenage experience, irregardless of the time period. The lead actors seem to be having a ball playing their roles and imbue the film with a believability that stands out; I'm pretty sure they're even playing their instruments. If I was involved as an actor in this film, I would feel very proud of it. I'd even show it to my kids and tell them about it.

The music, too, is fantastic. How Obayashi was able to get rights to The Beach Boys is beyond me, but hats off to him. And the song that starts it all, Pipeline by The Ventures, is a groovy piece of rock. To me, rock is like being at a Cornish ice cream shop; so many flavours and I only want to try a few. But what I heard here, I liked. Thanks Enrico!

Obayashi in Order:
1. His Motorbike, Her Island
2. Hausu
3. The Rocking Horsemen
4. The Girl Who Leapt Through Time
5. School in the Crosshairs
6. Tenkôsei