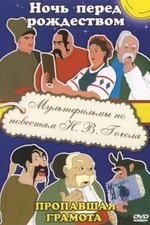 Perhaps the deepest cut in my animation revision so far, this 40 minute short is from maybe the only Soviet sisters in the medium. One of their longest films, The Lost Letter proves to be a strange little flick that feels like a Warners short took the train to Moscow. Based on a Chekhov story, it tells of an old cossack who, tasked with carrying a letter to the Tsarina, finds that his letter has gotten into the hands of demons, and now he must do battle with all the tricksters of Hell to get it back. It's a strange little tale but one that has a lot of charm thanks to the inventive animation style. A pack of demonic playing cards, for example, change their suit by jumping around. It's a neat trick reminiscent of Betty Boop and co., and certainly the faces and animation does have something of the elasticity of American cartoons from the previous decade. The story is quite loose and shambolic, even featuring a dance-off in the first nine minutes that leads to a solid bromance between our cossack and a fellow of his trade, and the tale doesn't really end, the film just sort of stops. But it's short enough to be very enjoyable cinema, if very slight.

If you're interested in finding out more about the Brumberg sisters, then I would recommend reading this article, which focuses on their silent career: (wfpp.columbia.edu/pioneer/the-brumberg-sisters/). It's well written and informative but I wish it went into detail on this film and their later works. Ah well.