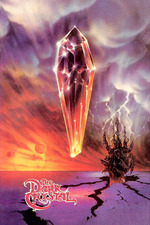 Didn't know I had it in me to really love dark fantasy for kids, but evidently I do. I grew up watching The Muppets, so Henson's sense of movement and artistry was already very appealing to me, but transferred to such a universe as the Dark Crystal inhabits it works remarkably well. Yes, in places the puppets for Jen and Kira do move like they've just escaped a Gerry Anderson set, but the Skeksis really impress, even nearly forty years later. They move with incredible grace and fluidity, even more so than the Starevich short I saw earlier this month, with little head tilts and gestures that mark them out as unique beings. The production design that accompanies them in their castle is really exceptional, lit beautifully to bring out the strange textures and recesses of the rocks. It gives the impression of being a fully-realised world, though the film's use of an artificial language and the creation of imaginary animals. That creation of a textually rich world helps keep the rather simple narrative moving in a leisurely forward direction.

That narrative is appropriately simple and open in its deeper meanings, appropriate for the crowd of children that were Henson's original audience, but what's interesting is how well it fits as an environmental allegory. The Skeksis exploit the land and their natural resources for their own limited and selfish aims, causing a situation where the world itself is on the brink of collapse. Jen and Kira seek to restore that damage through the recreation of the crystal that regulates the world itself, and ultimately involves the Skeksis and the Mystics merging to create a holistic race, one which promises order and peace through intelligent understanding and acceptance of the world around them. There's much more elaborating that needs to be done on this, obviously, but there's real depths to this film that perhaps have already been the subject of thoughtful writing.