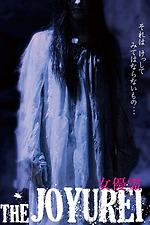 Hooptober 8.0, pt.5- In which Ethan remembers how 1996 was a very good year for everything except film.

In a minority on this one, but I was really taken by this little ghost story. Nakata is good at a subtle spookiness in modern locations and this is a minor masterclass in it. Apparently this was the calling card that got him the gig to make Ringu, maybe my favourite Japanese horror film, and the similarities are apparent; muted colour scheme, minimal camera movements, naturalistic acting. Its this treatment of the malevolently supernatural in a mundane manner that gives Nakata’s work its eerie power. When moments of violence do appear, they’re all so much the scarier for their incongruity, such as the maniacally laughing girl or the falling body in this film. Those jumps are smartly planted out through the narrative, which concerns a cursed film production at an old studio. The meta-film aspects are appropriately creepy, especially the idea of a mysterious cancelled film where the footage reveals the presence of a ghost, and the way that it appears repeatedly in mirrors prefigures something like Insidious by a good 15 years. However, at only 75 minutes, Don’t Look Up lacks the running time to wrap up all of the various plot points that appear. The old film’s connection to the director is never fully elucidated and the identity and backstory of the ghost are never touched on. The final act is very creepy and well directed, but it lacks the satisfying narrative resolution that I like in a horror flick.

The Wiki page of horror films released in ’96 makes for sad reading, with a lack of high-profile horrors, if you exclude From Dusk Til Dawn, though as a year for film in general it was pretty lame. Really, the best thing to come out of that year was Fargo, which, coincidentally, actually takes place during the weekend of my birth. How I envy people born in 1978, or 1982, or 2005, or 1960…