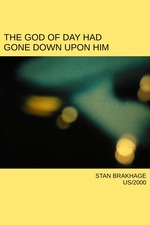 -Carmen in First Name: Carmen asks, “What comes before the name?”
-King Lear, Professor Pluggy (Godard) insists, “I ain’t interested in names. What if we made a mistake at the very beginning and we called ‘red’ ‘green’? How would we know today?”
-Two or Three Things I Know About Her, “What if blue had been called green by mistake,” a probable reference to the discussion of color naming in Part II of Ludwig Wittgenstein’s Brown Book (the Blue and Brown Books, 1958, are shown onscreen elsewhere in the film).
-The long section from Hermann Broch’s The Death of Virgil read out by Sabine Azéma in Fatale beauté (2B), in which the poet Virgil yearns to return to the “natal country … the universal time where nothing was silent for the silent eyes of a child and everything was a new creation”.

For far too long, film history has maintained a false opposition between Brakhage’s exteriorization of subjectivity and the “Brechtian” artifice of Godard, generalizations derived entirely from their most famous early works (their later works remaining largely unseen and comparatively underdiscussed). Yet with the benefit of hindsight, it becomes increasingly clear that Godard and Brakhage—notwithstanding their many important ideological, formal, and contextual differences—are two poles of a larger mid-century modernist project that challenged the naive assumptions that the film screen is a direct window onto the world, focusing instead on the structure of perception. The questions of the gardener in Nouvelle vague (1990)—who asks, “What is grass before it has been given a name?” and ponders whether it lies inside or outside himself—unconsciously echo the opening passage of Brakhage’s “Metaphors on Vision”:

Imagine an eye unruled by man-made laws of perspective, an eye unprejudiced by compositional logic, an eye which does not respond to the name of everything but which must know each object encountered in life through an adventure of perception. How many colors are there in a field of grass to the crawling baby unaware of “Green”? How many rainbows can light create for the untutored eye? How aware of variations in heat waves can that eye be? Imagine a world alive with incomprehensible objects and shimmering with an endless variety of movement and innumerable gradations of color. Imagine a world before the “beginning was the word.”

Extraído de Projections of Memory: Romanticism, Modernism, and the Aesthetics of Film.