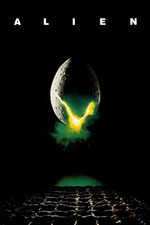 Not only is Alien an entertaining sci fi horror flick, but it has so much nuance hidden in every corner of the film, where every viewing is just as awesome as the first.

Alien is rooted in sexual imagery, provoking a sense of unease amongst the viewer with how it utilises this in horror, subjecting the characters to sexual violence, and playing into these fears. This ties into its feministic themes by reversing such sexual violence onto the males characters, so they can experience what women go through with sexual assault—or their experiences with pregnancy and childbirth—attacking their manhood in the process. The patriarchy themes are imbedded throughout the crew dynamic, and the development of this dynamic as the narrative goes on, with its commentary on gender roles and it’s take down on toxic masculinity. The film holds another source of thematic potency, which is creation and death, and How inconsequential we are amidst the cycle of life within the infinite nothingness of the universe—something that is focused on more thoroughly in Prometheus and Alien: Covenant. There’s many other themes present as well, like capitalist greed, and colonialism, etc.

A fascinatingly detailed world full of so many iconic horror/sci fi moments that are imprinted in my brain forever, and still impresses me with each viewing. The build up and the narrative structure is honestly perfect, and with the help of the craftsmanship on display, it holds a sense of dread the entire runtime, except for 2 moments; The shot of the xenomorph with its arms out like it wants a hug, and the shot of the dummy Xenomorph in space. These moments are laughably goofy compared to the rest of the movie. But other than that, it is a classic I should revisit more often.