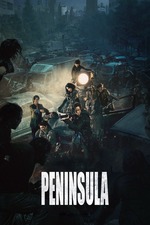 All we need is to let Sang-ho Yeon put some zombies on a plane so he can complete his Zombie Planes, Trains, and Automobiles trilogy.

(I chose to view this as a standalone film--it were a sequel wouldn't Joon be Soo-an, and the mom be Seong and the youngest her daughter she was pregnant with in TTB?--despite the marketing push)

At first I felt like this was what I imagined a South Korean John Carpenter zombie film would be like (Escape from LA but with zombies), but as it went on I felt it more similar to Neil Marshall's "Doomsday" (which owes a fair debt to Carpenter itself), going from breaking in and out of a post-apocalyptic quarantine zone, and culminating in a big car chase. There's stuff to like about this one, but nothing so much as to single out as a clear strength.

*btw everyone saying the car chases look like something out of the Fast and Furious need to go check their receipts, because a lot of F&F features some dynamite practical car chases and FX when Lin and Wan are at the wheel.