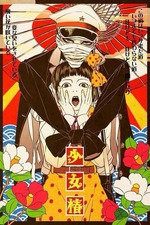 To tell you the truth, I no longer expect anything from traditional, commercial animation. The situation in Japan makes it very difficult for films like mine to enter the mainstream. Hayao Miyazaki is well-known in Japan, and his films are seen abroad. If his stories represent the official story of Japan, then Midori is a counter-story of Japan, one the Japanese State and powers that be have suppressed and tried to hide away. It is important to understand that this is not considered a major film in Japan.

There's no way to critique or really even say anything about Midori without trivializing it because it's aesthetically uncomplicated and talks straight to your amygdala. Midori is like Sen/Chihiro, orphaned and then forced to work, but not as the only living being in a world of ghosts but as the only vestal being in a world of vice. There's nothing really beyond appearances, which is I think the qualm for many: the physically and genetically deformed here are likewise corrupt in spirit, while the lone object of beauty is innocent. This is not an arrangement I typically prefer because from a humanist perspective I would like that ugly people not be ugly inside and I think pretty faces make interesting villains, but in a sense here the ingenue is the villain for tormenting her captors with an unconscious virginal and genetic superiority. Indeed it could be read that her improbable purity itself landed her in the freak show, which she never once tries to leave until, having been scouted by the film industry and then married to a magician, she is certifiably better than those in her milieu. For me this is what separates great miserablist porn from its lesser incarnations like Fire Walk With Me, whose protagonist is allowed to be lost but never the victor over her victimizers, who represent the feebly and socially constructed concept of "pure evil" and not simply the Other. Midori is more in the tradition of Justine, Tess of the d'Urbervilles, Streetcar Named Desire or Kuma Miko, works where the audience's shallow sympathy or pity for the heroine don't prevent her from spectacularly undoing herself, and so imparting their works with a morality. Even if it's a crudely deterministic message, it's still better than one everyone knows, like The Irishman's "don't kill your best friend," or Fire Walk With Me's "don't kill the prom queen." But mostly I just adore it because I'm edgy, and, unlike a lot of miserablist cinema, the unabashed joy of creation here is palpable, which means its evaluation of life is ultimately affirmative, far more than works that fixate exclusively on positives or negatives.