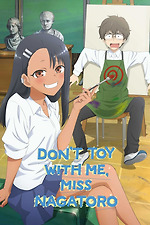 Nagatoro is into the self-insert guy because he's a promising artist, and despite his passivity this already puts him head and shoulders above the average harem protagonist who represents the audience and not the author. She's basically his muse and is constantly encouraging him to be better, which is what everyone's Inner Girl critic was for anyway (and why smug anime face is such effective rhetoric), and it's a mistake to place this locus from without (unfortunately this is where incels and tfw no gf posters get tripped up).

Everyone needs an ass kicking I reckon and since institutions no longer provide this you must Kick Your Own Ass. Become your own Nagatoro.