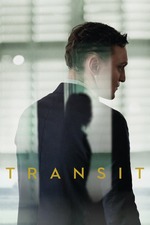 Has there ever existed a more subtle and non-expositive use of a gimmick like the way Petzold films a Nazi-invasion story in current day settings? The film is never calling attention to this anachronic sleight of hands because as usual in Petzold what really matters to him is character-building and fiction. The displacement in time is neither central as a showy decision nor is it explored for maximum effect at any given moment: it is what it is, it's clear from the beginning, and that's all. Let's get to the story.

The real amazement, then, comes from how slowly but certainly the film makes us empathize with not only its protagonist but everyone who roams (and there´s a lot of roaming in the film) around him. The use of a "first-person" account narration by a character who is barely present in the film is at the same time an idea which is very much originated in a literary logic, but feels incredibly organic - and the tone and wording of the narration is nothing short of hypnotic.

Another thing to admire is how short and straight to the point the film is: it´s as if there's not a single "extra shot" or line of dialogue that doesn't need to be there. We completely understand the feeling of alienation felt both physically and emotionally by the characters and how they all seem to believe their own powers of fiction will come to save them from damnation - an illusion both them and us know is not going to last, and still it´s so beautiful to believe in it.