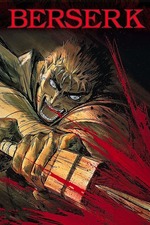 “In this world, is the destiny of mankind controlled by some transcendental entity or law? Is it like the hand of god hovering above? At least it is true, that man has no control, even over his own will”

First off, I want to say Rest In Peace Kentaro Miura. I kinda feel bad that I didn’t watch until after he passed away but better late than never I guess. Kentaro Miura truly created something amazing here. I have never read the manga but I’m definitely thinking about starting after watching this.

The ending is not what I expected at all but it was amazing! It was kinda weird and trippy but it was great and makes sense. The lessons that this anime teaches you by the end are very good. I won’t get into it though as it would be better if you watch and see it for yourself. Only bad thing about the ending is that it ends on a cliffhanger. There is no second season so you will never know what happens. I guess the manga will tell you what happens since it’s still going. I don’t know though because I haven’t read it.

One final thing, this is another example of an anime that isn’t for kids. I hate when people say “anime is only for kids” shut up with that bullcrap. This show isn’t for kids at all and same with Black Lagoon which I reviewed yesterday.