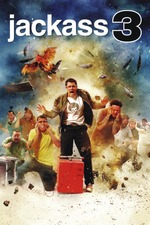 Another day in the South.

Embracing its gay subtext and disrupting normalcy against societal norms as always.

The first one ends with them recognizing and founding hilarity in continuing this path that will let them to their downfall. Most of american iconography being destroy and old white men being blown away in all fashion.

The second ends with a clear melancholy to seeing these men still continuing to hurt themselves for the pleasure of their audience, like coming from the punk scene of the 90s and seeing Youtube being born out of these concepts and levels of stupidity.

And the third ends with a look at the past and presents them as who they are. These guys are lunatics, but that doesn't stop them from being humans. It's all performative, but not any less true.

Another film that i would have love seen in 3D.