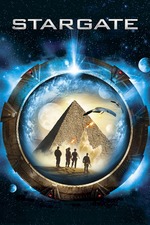 I clicked "I've seen this film before" with great relish for this one. A childhood favorite that I rewatched upon hearing that its original writers and director had signed on for the inevitable reboot. I suppose this might be what passes for original material in the current age of the Hollywood blockbuster: an original story from twenty years ago gets remade by the guys who wrote it in the first place.

Still, while I think the 2014 bam bam pow laser treatment will go well with a new Stargate, the remake will almost certainly be missing the following:

1. Djimon Honsou credited only as DJIMON

2. Genderflexible characters like Jaye Davidson's Ra and Alexis Cruz' Skaara. Ra has great outfits, and I had major Skaara feels when I was a young'n. I'm always glad to have had characters who were not the usual mix of gender signifiers and out-and-out testosterone.

4. Probably too gauche now: "Give my regards to King Tut, asshole."

5. Kurt Russell, whose entire backstory is that his kid found his gun and accidentally shot himself, seems to resolve that issue by... giving a lot of guns to even more kids, and luckily none of them shoot themselves.

6. The badguys just keep giving them easy chances to turn the tables. This is something I do not miss in older action films.

7. There's nothing after the credits!

8. However, the credits include an invitation to learn about the making of Stargate by purchasing an informative CD-ROM.

10. Viveca Lindfors, who lent this movie an air of class. It was one of her last films before she passed away. RIP.

... so, obviously this is an absurd movie that's running plays from a lot of superior action blockbusters, but it's the spirited kind of absurd that you could get away with in the 90s, and that young kids like me just ate right up. It remarkably didn't set my inner Edward Said alarm off too badly, either, though that could very easily be the sedating fog of nostalgia talking. I will see the remake, but it has its work cut out for it.

I Am Not a Hipster