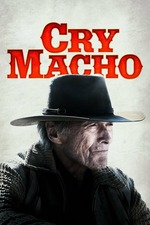 He always liked animals, which is another way of saying he didn't necessarily always like humans, but the film decides not to expand on this all that much. His own history of violence stays hidden under the brim of his hat, and the one he's inserted in, when searching for someone else's son in Mexico, doesn't really take shape, either. The worst thing the supposed bad boy does over the course of the film is stealing a few sips of beer, while his supposed mother from hell is a great presence without any substance, almost like a character from a different film that dropped into this one by accident. The chase isn't much of a chase, either. Most of the time, the hunters are ridiculously easy to get rid of, at one time, even changing a door sign from "open" to "closed" is enough. The running gag that during the few real confrontations a rooster does most of the fighting is great because it almost doesn't register as a gag but feels completely natural. And one of the greatest bits has Clint shooting suspicious glances at local law enforcement lurking in the vicinity only to find out that all the sheriff wants is him taking a look at his sick old dog.

It's really something Clint hasn't done for a long time, giving in to sentiment that thoroughly. The magnificent second half at times even evokes the reluctant communitarian utopianism and ballad-like structure of JOSEY WALES and BRONCO BILLY.

For all its warmth it's still a sceptical film, though, playing at times like a Christian tale of redemption that in the end still isn't sure whether god exists or not. Clint is the guy who only opens up a little bit only while making sure that no one can look him in the eyes. The political anger so central to his recent work is almost completely absent this time, probably because the focus is not on institutions, but on family. Instiutions fail us (according to Clint), but they also are something completely outside the individuum, while families do their damage mainly from within, as internalized pressure systems. Cops you can bribe, but family you can't buy your way out of or completely run away from. All you can hope for is to be able to leave behind the tightest bonds, avoid the severest beatings.