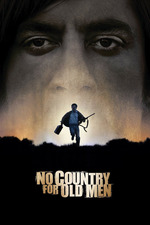 No Country for Old Men is an allegorical modern western that captures a country in transition, thus commenting on present day society and providing an almost nostalgic analysis of the nature of good and evil and the inescapable stranglehold of fate.

Sticking to most genre rules, only to pull out the rug from underneath you at the very end, No Country for Old Men together with There Will be Blood seem to best represent what the modern Western can be. They are almost polar opposites in how they approach what they try to say, but they're still sides of the same coin.

On a literal level the plot is very straightforward, carried by a host of intriguing characters and can be seen as a classic cat and mouse game. That's the beauty of this film, that even on a superficial level it is better than most films. It is entertaining, never loosens its grip, is extremely violent and drenched in a brilliant and often subtle irony, something the Coens do like no other.

Another thing that I absolutely love about this film is its tranquil atmosphere. Sure, there is a lot of action and violence in it, but thereis always this permanent sense of calm. The best way to explain this is by taking a look at the opening scenes. Quietly shot, that first murder has, for all its horror, a kind of stillness over it. Switch to Brolin hunting and I'm glued to the screen, readily accepting going under this film's mesmerizing powers, strengthened by the bizarre absence of music.

It is shot beautifully. The attention to detail is admirable, the crispness and gorgeously lit images are simply stunning. It seems as if everyone involved in translating the screenplay to film brought their best and managed to create this visual treat. Even when nothing is going on you cannot help but admire and marvel at the visuals on display.

Digging a little deeper there is a lot to mull over underneath the surface. I haven't read the book, but think McCarthy is an interesting voice in American literature. I don't think I ever will read the book as I get the distinct impression that the Coen brothers managed to capture its themes really well. It at points feels like a novel unfolding before your eyes.

The three central characters seem to be the embodiment of everything this film has to say. No Country for Old Men, obviously, refers to the fact that society is changing and that values change along with it. Representing the old values, we are presented with Tommy Lee Jones' sherrif Bell. You can read the road map of his past from the lines of his face. He is nostalgia personified, unable to understand the change that is happening to his surroundings despite all the wisdom he has gathered in his life. He knows a lot but understands nothing resulting in the only logical outcome, he turns his back on everything accepting his fate and becoming stagnant. Physically he doesn't die at the end, but spiritually he does.

Juxtaposed to the sherrif we are given the personification of change. An unstoppable force of nature that has no conscience. But the beauty of Chigurgh and the way the brilliant Bardem portrays him is that he is not a simple angel of death. Not simply evil, he also embodies fate, showing us the random nature of life and the inescapable qualities of fate. Chigurgh is not so much what society will become, but more the change that is needed to get to where it's going.

(There are slight spoilers in this paragraph)
Veering between these two is this film's everyman, Llewelyn. He is the vessel through which we experience the story. Neither good nor bad, he is at the whim of the universe as he never seems to have control over what is going on. The Coens seem to use him ironically to show us how helpless we are in the bigger scheme of things. For example, Llewellyn steals which is, according to standard values, wrong. But he almost gets away with it. It ironically goes wrong when he tries to perform an act of kindness. This sets in motion the series of events that eventually lead to his death. Try as he might, he has no control over it.

In the end, with themes as big as this running through it, what resonates most with me is the tonal change of the final act, initiated by the way the Coens handle Llewelyn's death. It happens off screen, completely negating the importance of the plot and storytelling conventions only to shift to a more spiritual tone. It is here that Tommy Lee Jones comes to his epiphany that he has to accept that his place in life is not what he originally intended it to be. He seems to accept that he has done enough and can leave the protection of his world to others. He grasps the concept that understanding the world is far less important than understanding yourself. This also leads to the much debated ending that doesn't sit well with many people. I think many people dislike it because of its abruptness but also because they were not given the traditional climactic confrontation between protagonist and antagonist. I, for one, love it as it perfectly exemplifies the fleeting nature of life and in it Sherrif Bell speaks the definitive words that encompass what this whole journey has been about for him.