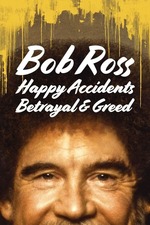 Grievance documentary content is really not my thing, and by that phrase I mean one-sided litanies that strictly give air to complaints without interrogating the complainant or complicating the ethical questions that will be in the head of any semi-conscious viewer. Such films use leading music, "natural" asides, and other editing tools to calibrate their force to maximum effect, but in doing so unwittingly, but ultimately, undermine their credibility to critical viewers.

Let's take as read the thesis of this documentary: the Kowalskis, the couple who run Bob Ross Inc, are not great human beings and have engaged in business practices that are at best of dubious ethics.

Here's an interesting angle of enquiry: without the Kowalskis, would Bob Ross be remembered, much less venerated? In a closing "go out on a high note" montage, much is made of the enduring power of Ross to affect lives directly today. Earlier in this content (it happens to be feature-length, but calling this a film is really just honouring a historical accident in what being a "movie" consists of in 2021), much is also made of Bob Ross Inc's commercialisation of Ross post-his passing, and the number of products (some illustrated with screengrabs that are clearly from non-sanctioned vendors, but we'll let that pass) that exist.

Let's explore that, and imagine a better version of this film. We can acknowledge that the Kowalskis are BAD, we can take the time to make the viewer feel good about feeling that the Kowalskis are BAD because apparently that's something we need documentaries to do, but what if this fellow who would have had no reason to live without Bob Ross had never seen Bob Ross? What if legal entanglements or a lack of interest from his son had led to the gradual fade of his cultural cachet over the last thirty years?

What in fact would the Ross legacy have been if caretaken by his son? There's zero question from what's presented that the legal agreements were messy and between people with pre-existing conflict, but let's just imagine Steve Ross (a man who presents, in many ways, very differently from his father) had total control, and was somehow in some fairy-tale way handed the keys to BRI upon Bob's passing. What would have happened to that legacy, and would it have been more or less prominent than it's become under BRI's hands? And is that more or less important that any injustices that Steve has experienced?

Not only does the film not answer these questions, nor ask them, it doesn't give the slightest hint that the filmmakers were able to consider formulating them. It is borne of a grievance, it's about articulating a grievance, and once it has firmly ensconced Bob Ross's status -

- and I should note here that the first half or so of this I was pretty much enjoying it despite reservations about the case that was clearly building, and if you want to celebrate the man, maybe watch and check out when he checks out -

- anyway, the back half dedicates itself wholeheartedly to upholding that grievance even in the face of evidence that makes even mildly critical viewers raise their eyebrows at the level of credulity we're meant to maintain.

If that's what you want to watch, then: yay? I just feel slimy, more so than anything for contributing to an algorithm that will perpetuate more grievance documentary content.