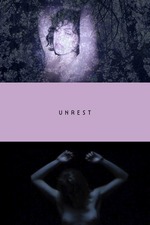 Sequence one: The emergence of the sexual as projection onto and into nature (vice-versa). A somewhat more straight forward visual display compared to what comes next. Snuff-esque lighting illuminates the figure who appears to be discovering masturbatory sensations for the first time. The instability of the arboreal images show dissonance within the two projections.

Sequence two: a body floating in a liminal space. Grandrieux has managed to produce an image of liminality that contains the body. I like to think of it as the space between images that this body occupies. I didn't notice the dark borders at first, but looking closely I found as the arms shifted, they became enveloped in darkness. What happens in between the images? Movement is disrupted and almost unrecognizable. In a Baconian manner, Grandrieux contains the body in a dark prism.

I wonder if the body is trapped or merely slowly passing through. I read somewhere that Bacon would first paint the prisms that his figures reside in. The first step is the container and then the figure emerges from within. "Twin Peaks: The Return" depicts this method clearly with the strange creature that appears in the cube.

Sequence 3: Unfortunately I don't speak Japanese so I'm not sure of the significance of the spoken language aspect. I mostly found the image to almost be a portrait of a ghost. Another figure that is not quite here or there. I imagine this was filmed at night in a field, but I can't say for sure. The body moves strangely in a quiet dance. The darkness encroaches, shifts, and moves away.

I see each sequence as the building tension of images in constant motion. It is body or the figure that most contend with this tension. It shifts from orgasmic ecstasy through masturbatory projection, into complete liminality, and finally leaving us with an ambiguous figure that is still finding its place in the image. The birth and death of the figural.