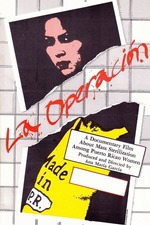 It kills me being only the 5th log on letterboxd for this film. Before the 1980s, there were no female directors in Puerto Rico. La operación is essentially the first woman directed film in PR. Not only that, Ana María García covers the policies of population control used in the island, a topic which, to this date, is not taught at our schools. The sensitive testimonies make it very clear from the start: the women undergoing la operación didn't really know what they were getting into. Some were even used as guinea pigs for earlier versions of the birth control pill. La operación is a very valuable Puerto Rican film that definitely deserves more views.