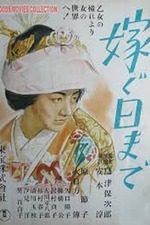 Bit of a reactionary film, Setsuko Hara married off on screen for the first of eleventy billion times in her career. She was known for playing western-style, so-called mogas or modern-era girls early in her career, but as those characters fell out of fashion in nationalistic wartime Japan at the end of the 1930s, her star persona was repatriated back home and Toho turned her into the ideal domestic Japanese actress, or ideal Kinema actress of Japan.

Director Yasujiro Shimazu was known for being more socially conservative in Japanese film circles, so he served as her first early mentor director starting with this film. This marks the start of their collaborations during the early 1940s. Setsuko plays a flat, idealized and frankly uninteresting character-- just a type; but when compared to her moga pictures, in particular Woman in Tokyo (1939), one can see the modern vs. traditionalist aspects coming together for her later Ozu films.