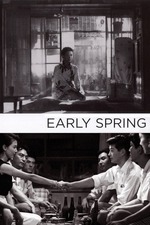 Like most Ozu films, Early Spring was ho-hum pleasant on first watch with a great scene near the ending, but reveals itself to be an intricately crafted masterpiece the second time around. The director took a few years off -- semi-retired after completing his most famous film, Tokyo Story -- but when he returned Ozu said he wanted to recapture the essence of a young salaryman's office and marital life. What we have here are two terrific acting performances by Ryo Ikebe and Chikage Awashima as the husband and wife at the heart of the film, and a myriad of supporting cast characters who all get their fifteen minutes while enhancing the story's major themes. The office flirt Goldfish (Keiko Kishi) gets most of the attention as the woman with whom Sugiyama (Ikebe) has an affair, but it's the dense co-worker friend with the square face, the annoying pal who always steals people's food and complains about hiking and everything else, and the old men who hate their jobs and sardonically drone on about their wasted lives while the protagonist's optimism slowly dies in a bottle of sake next to them at the bar, that really make this movie so great to watch. Without Chikage Awashima's performance, this might have been exclusively a masculine film, but her determined resolve as the unhappy, suspicious wife really balanced everything out.

Honestly this is just as as good or at least almost as good as anything else Ozu ever directed, and I think it's my all-time favorite movie cover on the Criterion DVD.

In the Mood for Love