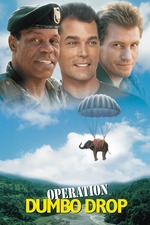 Tuco really tried to kill that elephant with a fire extinguisher.

Disney would make a Vietnam War movie about an elephant.

The Short Round archetype lives on.

That soundtrack slaps. A Boomer's dream.

Live-action Disney movies might be the single least respected class of film on here, but it's kind of amazing how many and varied of them were made in 1995. Like if you have a Disney+ subscription, check out the Decades collection and just explore 1995 sometime. It's crazy.