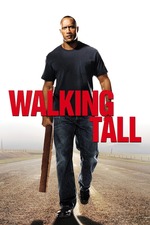 Like, The Rock definitely uses that piece of wood to fuck up a casino and a bunch of dudes, and it's awesome. He also goes to jail and then runs for sheriff and beats the guy who arrested him, and this happens over the course of like five minutes. And then he has a massive shootout with the cops he fires ten minutes later, killing them all. This stuff is glorious!

But the movie doesn't really revel in it. Everything just kind of happens then we shuffle along to the next plot point without any transition. It feels like the months of events here happen over the course of one day, and that's funny, but it should feel more fun! The ending is possibly the silliest thing of all (spoiler alert) when The Rock simply shuts down the bad guy's casino that the town's economy depended on after the big mill shut down years before... and then magically re-opens the mill! Like, he just does it, it's not explained, and this happens over thirty seconds right before the credits. My wife and I were laughing so hard. I just wish the rest of the movie was that confidently himbo-galaxy-brain funny, but at least The Rock has now made a career out of movies exactly like that.

One more thing: it's inexplicable that Johnny Knoxville plays a dude who's introduced as fresh out of jail and newly sober. Who decided that fans wanted to see him as a boring, healthy guy?? Bonkers.

So this is okay early The Rock, and the plot feels like a pre-Trump conservative fantasy (the evil casino is right next to an adult bookstore!!! which presumably also closed at the end!!), but I'm not mad my wife made me watch it at all. Worth it if you're a fan of the guy, probably not if you're not.