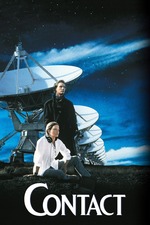 I finally read Carl Sagan's novel last month and decided it was time to revisit the film adaptation, a movie I'd loved as a teen but hadn't seen since. I knew going in that it made some major changes to the story in order to fit its vast scope into a movie and I remembered so many of the details despite the twenty year gap since I last saw it, but I still wasn't prepared for how much it made me *feel* to see Sagan's detailed and soulful yarn brought to life all over again.

I feel like this is one of those cases where knowledge of the source book gives me an easier understanding of the events on screen and more context for appreciating why and how everything happens. The adaptation doesn't really mangle any of the themes or meaning of the story, but it does by necessity truncate them, convey some of it in quick shorthand, and spend less time elaborating on what exactly happens when the world turns on that machine in the final act.

So all my recent knowledge of the book floated on the periphery, informing and enhancing this movie I knew so well growing up, which was nice. But most of all I was struck by how faithfully Robert Zemeckis - at the time riding high on popular acclaim after the massive hit Forrest Gump - stuck to the meandering, philosophical, introspective novel it was based on. They could have turned this into a big thriller or focused on a romantic coupling or done any number of blockbuster-type stuff to puff up the earnest story of what might happen when humans finally contact other intelligent life. But instead Zemeckis uses every tool at his disposal, including very well done for the time cgi, to craft a slick, absorbing, and utterly serious look into its subject matter.

My only major complaint would be that, by shortening much of the final sequence and its aftermath, the full impact was made easier to misinterpret. Sagan has dozens of pages after the climax to spell out exactly the way he draws a connection between the search for meaning in science and religion, making it clear that he thinks they do not need to be pitted against each other, that scientifically discovering the vast depth of creation can actually enhance, rather than take away, from a religious person's sense of awe at life. The movie does this too, but it could easily come across as "science and religion are kind of the same," which is far from the intention. I suppose this nitpick is the kind of thing that happens when directly comparing an adaptation with its source material, and it's relatively minor in the big picture, but it struck me as my wife had a few questions as the credits rolled.

Overall, I'm so happy to have revisited this adolescent favorite, especially after reading the surprisingly magnificent book finally. Don't get me wrong, Carl Sagan is a genius and I expected great things, but a gripping narrative and colorful characterization weren't exactly anticipated when I opened its pages. To see then how well it was represented on screen - faults and all - in 1997 is kind of astonishing.

Plus, that incredible mirror shot early in the film was one of those defining moments of my young life as a movie fan, solidifying my sense of wonder and love for the medium and ensuring I would be a big film dork for the rest of my life. So fun to see my wife sitting there, saying "wow" over twenty years later.