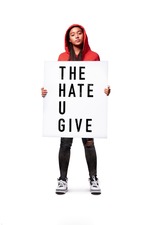 The Hate U Give

'Crowdpleasing' has never been a term I particularly liked, especially outside of the four-quadrant blockbusters. Whenever a drama, especially a drama that deals with serious issues gets called 'crowdpleasing', it usually means that the issues and themes have been pacified enough that it's not going to piss off anyone for the sake of making an extra buck or two. But I was hopeful walking into The Hate U Give. In a year where we have had three films that tackled police and societal racism in different and unique ways (Blindspotting, Sorry to Bother You, and BlacKkKlansman), I was excited to see this kind of story translated to a younger, more female-centric demographic.

And that's where 'crowdpleasing' comes in. The single biggest issue with The Hate U Give is that it can be seen by an unsupervised 13-year-old. Not that unsupervised 13-year-olds should not be watching films like this, quite the opposite, but in the way that the MPAA is set up, very few topics can be handled with enough honesty and intensity under the PG-13 rating. Not because of the restrictions of the rating per say, but because the PG-13 rating is in mind the entire time. The Hate U Give is one of the most PG-13 movies I have ever seen. For every microaggression, there are two really good white friends to Starr because there are more good white kids than bad. For every protest there is the implication that protesting doesn't solve anything and always devolves into riots. For every moment of spectacular emotion, there is lip-service being paid to the structure of systemic racism and the seemingly inevitability of it.

I'm not here to virtue signal, but what does it tell the young people when a movie's core message is 'be nice and quietly brave and then the cops won't shoot black children'? I'm all for human decency but that's irresponsible. The Hate U Give is a movie about profound civility. It is a book club version of the horrible situation going on in America today, complex problems with complex details given a simple, white-bread solution (and yes that pun is intentional).

I have not read Angie Thomas' novel that the film is based on, but knowing how intensely people pushed back against it, it must have bigger balls than the film does. Because this movie is not on this earth to change hearts. It gets close at moments, little snippets of gold like the indictment of popular protest culture and the callousness of the media when reporting on minority communities are some of the few universal punches that the film does really well. And it'd be unfair to have a review and not talk about Amandla Stenberg's magnetic, heartbreaking, and masterful performance as Starr Carter. She holds the film together and gives every moment she's on screen far more impact and nuance than it deserves.

If The Hate U Give opens peoples' eyes, then it is a net positive for society and filmmaking as a whole and I am glad it exists. But for a film where that seems to be its primary goal, it is far too pacified, complacent, and because of that, dull for my taste. Do you know, reader, why Blindspotting made less than $5 million? Because it looked everyone in the theater in the eye and said "you can do better so why don't you?" The Hate U Give is currently around $20 million at the time of this review. Because it looks you in the eye and says "you're doing great sweetie. Everything's going to work out whether you do anything or not."

So why even bother?