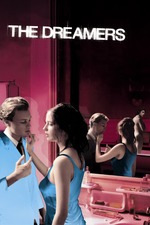 Why do we watch movies?

I have an endlessly immense personal attatchment to this film. Maybe it's my love for travel, film, France, or righteous rebelling against authorative figures; but there's something about "The Dreamers" that makes me feel warm inside.

Why? It's simply one of the most beautiful films ever made, an ode to the history of cinema and a poetic love letter to Paris. A divisive masterpiece that's both emotionally touching and endlessly fascinating in its depth.

The most important part about a movie watching experience is the feelings you get while viewing the said piece of art. The Dreamers could've been a much different film if Bertolucci didn't take any risks/took out provocative elements, but it's the shock factor mixed with the symbolism behind it which makes it much more meaningful.

Bernardo Bertolucci has made something with a youthful vibrancy to it in "The Dreamers", a depressingly beautiful examination on the governments repression of our freedom, the consequences of not growing up, finding yourself in society's morals, and family relationships that have a toll on our love life. The freedom and the right to find what you're capable of is another present theme.

Bertolucci's direction is perfect. He masterfully charges "The Dreamers" emotionally and erotically, using the provocative parts of the story to stun and the beauty of the deeper meaning to make viewers think.

"The Dreamers" is a heavenly experience if you can let yourself go and appreciate all that your senses are feeling. The sounds make me feel like I'm on clouds, and the mix of classic rock with French/older songs is my favorite soundtrack ever. The regal tunes remind me of Disney by night/any other stunning and warmly lit places, it's a romantic feeling that is maintained throughout the entire film.

It's surprising that this is Eva Green's first film, she's wonderful as Isabelle; and Louis Garrell is great as her male counterpart Theo as well. There are many ways to determine this underrated masterwork (I don't know for sure which are right are wrong), but I view it as a subtle political commentary.

Isabelle and Louis' almost incestuous (yet not physical) relationship as Siamese twins negatively impacts them as it represses their desire to go out and live like normal people. It's not only their relationship, but pressure from their parents as well. Bertolucci purposely put them in the setting of the Paris student riots to show the result of the open ending in which they embrace their free will and separate selves (Bertolucci has always been a pretty political filmmaker and few people seem to notice). The moment Theo brought back a girl and Isabelle went on a date with Matthew was the moment that they had a taste of life without each other, overwhelming to both of them as they are quintessentially the same person.

Michael Pitt plays Matthew (also a great actor as he shows in Haneke's American "Funny Games"), who joins Isabelle and Louis' relationship. The three of them become one, and Matthew's qualities influence the behavior of the once exclusive relationship between the twins.

Matthew is the embodiment of their buried longing for freedom and his presence is both destructive and beneficial towards them. He's one of the characters I've related to the most, being a lover of film and a traveler longing for experiences.

The Twins are infantile in their thoughts and immature, they'd rather be idealists than activists and clearly won't take action. I can analyze the beautifully complex story in many ways, but all in all it's about growing up in our fucked up world as a rebel; the closest I've felt to any cinematic narrative at that. The world feels against you when you're young, and if you don't stand up for yourself you'll never grow up.

The technical parts of the film fit beautifully as well. The soundtrack is perfect for the scenes it's tied with and the cinematography and colors make for a grandly pleasing aesthetic. The camera flies through claustrophobic rooms and the open streets of Paris, and Bertolucci's talent as a director shines.

Not to forget that ending, it still manages to completely floor me.

When unavoidable obstacles face us in life, such as the need to protest against a higher order what do we do? We dream. We dream on, dream of a world where love and life are intertwined, where peace is abundant and violence is unheard of. The Dreamers of today are the creators of tomorrow.