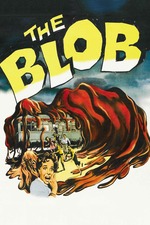 Another movie that I regret not watching previously. To be fair, it has a mixed critical reputation, but there are a couple of things going on with that, I think.

The first is that this is a technically limited film. The squishy wiggly sound-effects go a long way, but the decision to keep undercutting the sound design by showing a mass of shiny plastic that rarely moves even by the standards of yesteryear presents a real problem for anybody looking for actual thrills coming from that direction.

The actual stakes, as it were, are something completely different: Will the perfectly reasonable, nice[1], and smart “teenagers[2]” be able to convince the largely inept[3] adults to do something before an alien takes over the world?

And it is this second concern that I think makes most older audiences flinch. The Blob is absurdly progressive in the most literal sense of the word. It literalizes the notion that the kids will be alright as we let them take charge. It is an ideal that I believe in wholeheartedly, even as my old brain grumbles that things were better back when.

Minor spoiler that was extremely important to me, personally: the dog lives.

[1] It's not coincidence, I don't think, that the "hoodlums" who look like trouble at the beginning aren't really out to antagonize anybody except in a playful, juvenile way, and are later heroic, friendly and polite even as they are treated poorly by the authority figures.

[2] Steve McQueen was 27 when he filmed this, and he looks like he could be nearing forty.

[3] The adult plan to electrocute the blob (after an earlier attempt with chemistry also fails) is theoretically sound, maybe, but it's hardly a coincidence that the kids are the ones who figure out how to effectively disable it.

The Decline of Western Civilization