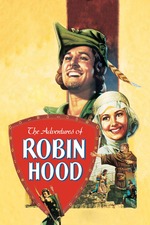 The Adventures of Robin Hood

Two primary issues here: the first is that this was clearly in the transition between silent films and talkies, in that there is still a fair amount of exposition delivered by way of title cards (and more than a smidge by bad guys speechifying), and the second is that Robin, as portrayed by Erol Flynn, is just such a frat-boy dick. Sure he’s a jerk to the Normans, but he is also an asshole with his obnoxious merry ruffians, and his recruiting is entirely in the form of hazing followed by the sort of deep laughs that Ric Mayall rendered ridiculous.

It makes me weep to think that Tyrone Power was unfavorably compared to Flynn at any point. While Flynn’s stunts are outstanding, and he is, perhaps a better foil (ha!) for Basil Rathbone in a swordfight, he doesn’t act so much as say things confidently. Mamet would probably love directing him.