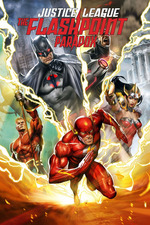 Watched this one (and the next) on a laptop while parked outside the emergency vet's office.

What it gains in "WTF?", it loses in character motivation and narrative clarity. "Now, who are these people?" is not supposed to be the default generator of plot momentum. Especially since they are mostly dead red shirts 30 seconds later. This is further heightened by the story never even feinting at the inciting incident; it' all background and, much later exposition. There isn't so much as Barry taking a few shots or whatever[1] to see how he might have done what he is supposed to have done. It's just a lot of guilt for a thing that is never seen.

The continuous stacking of casualties is impressive, and it makes things tense in spite of the sort of narrative that inevitably has to be unraveled.

[1] This would have been easy too. Barry in a bar celebrating his dead mother's birthday. But nope - it's just an assertion as to his (unknown to audiences) new power being used for selfish purposes.