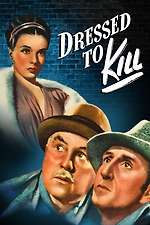 Dressed to Kill had the wonderful effect of sending me back to the Stephen Fry-read version of The Complete Sherlock Holmes on Audible (it is impossible to recommend that too highly). But a key element of those stories is that Holmes and Watson are (very) young men; I'd estimate 28 at the latest.

Which does a weird thing to the action of this story. While the narrative has remained the same, Basil Rathbone (age 54, but looking a worn 65) is incapable of the sort of gymnastics required to free himself from a particular trap (without the help of a stuntman) and the antagonist then, as regards Holmes, is less femme fatale than fille coquette.

In a further deviation from the source, the script would have you believe Watson is a stone-cold moron incapable of even the most basic deduction (I suspect in order to make Holmes look smarter) but yet he sometimes leads the great detective to the correct path with his stream-of-conscious prattling. Nigel Bruce does not do anything to mitigate that.

Still, if one is watching movies such as this at night, it is because one is looking for something that requires fewer brain cells than even bad (e.g. CBS) television, and on that score it delivers. The black and white frame[1] composition is fine in spite of Amazon's awful print. Rathbone still has an excellent voice and presence. As with so many classic movies, it's at least better than 90% of what's on Netflix.
_______________________________

[1] There is also a colorized version, but I don't think it's worth the watch to see the potential improvement in film stock is worth the sacrilege..

The Adventures of Robin Hood