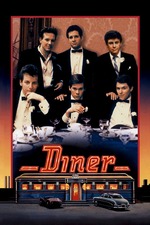 When I was in high school, my primary friend group was exactly three guys and three girls. Whenever anybody started dating outside of the coterie[1], the, uh, challenger was immediately presented with a daunting task. All of us were polite, of course; pleasant, even. But there were few conversational openings for anybody who had not spent almost every available hour together for six-plus years. In-jokes were less jokes-ha-ha, than emotional Pavlovian bells.

Our circle lasted, in diminishing intensity, until about 6 months after everybody graduated from their advanced degrees, be it law school or medical school, or what have you[2], and the last time everybody was together, it was at the second wedding within the group. All of us except the bride and groom were located at Table 4.

There are a million things I can not nor will ever remember about my twenties, but I’ll never forget Table 4.

So as regards Diner, I get it. Boy do I get it. But at the same time the idea of an all male friend group is unfathomable to me. And the people depicted in this movie were very much not my people. I actively disliked every character in the film and, perhaps even more of a problem, in spite of a million similarities of context, the deviations were enough that I couldn’t empathize with any of these guys[3]. Watching this felt like seeing the inner lives of people I didn’t like in high school, and having those lives be exactly as bad as I would have imagined.

To be clear, I would bet a lot of money that the grown version of those guys watching a movie about our group would feel similarly. It isn’t a question of any group being superior; it’s just that the mindsets are so alien in spite of cohabitating the same space-time.

I’m certain my negative response to this movie is more intense because it is such a near-miss, and so would, even more than usual, say my reaction is not going to be typical.

[1] As is always the case., in my experience, with mixed-sex company such as this the various in-group pairings were constant and varied.

[2] I took a lot longer to graduate even from college by going at night. Not all who wander are lost, perhaps, but I sure was.

[3] Except maybe Kevin Bacon doing his best to drink his IQ down by a couple of dozen digits.