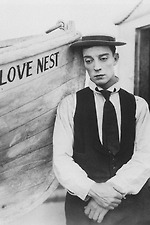 I have to admit I didn't expect this Buster Keaton short film, called The Love Nest, to end up with Buster at sea, in boat-based shenanigans. Keaton quite often liked going to sea, and usually it worked. Here, a little bit less so, though The Love Nest remains a fun 23 minutes.

I have now seen all of Buster Keaton's short films, as released by Masters of Cinema on bluray. A good time was had by all (i.e. me).