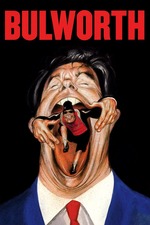 "Yeah, yeah / You can call it single-payer or Canadian way / Only socialized medicine will ever save the day! Come on now, lemme hear that dirty word - SOCIALISM!"- Jay Billington Bulworth

Warren Beatty's blistering "Bulworth" is the story of a politician who reaches a magical point where he simply doesn't give a fuck anymore. So he starts speaking the truth, regardless of consequences, and finds that he feels more alive and energized than he has in decades. The public suddenly embraces him as well, appreciating his blunt honesty.

I can't decide whether "Bulworth" is incendiary or problematic. It's incendiary because it illustrates the sad, brutal truth that the Left wing and the Right wing are part of the same bird, that the Democrats simply pay lip service to ideals that people want to hear about but really don't care any more about repairing social injustices than the Republicans. The Republicans are simply more open about not wanting to repair the system. The same corporations and billionaires are financing both sides of the aisle, to ensure that they stay in power and keep making money.

It is problematic because Jay Billington Bulworth (a vibrant and exciting Warren Beatty) falls in love with a black woman and suddenly embraces black culture. He begins rapping at press conferences and in debates. He starts dressing like a gang member (for lack of a better description). Plus, though he certainly rails against the corrupt establishment that is ruining the country, he doesn't really seem like he's trying to DO anything about it. Of course, this movie only takes place over the course of a weekend. A weekend where an incumbent senator tires of lying and decides to speak the truth. He's just beginning to change, so it's probably a little far-fetched for him to start making real, lasting changes in that time period.

But problematic or incendiary, "Bulworth" has more balls than a hundred other (non-Spike-Lee) movies. It feels like an honest-to-God call to arms. I can't believe a major studio made this film and then released it in May! During the height of summer blockbuster season! That's the sort of risky, audacious move that studios just don't make any more and probably will never make again. Shit, because it was made by 20th Century Fox and is now owned by Disney, "Bulworth" is probably going to get buried as deep as it can. Its topics and anger are still relevant, perhaps more now than ever (there's a rap about socialized medicine and at one point a pair of corrupt cops stop and threaten a group of black children because they're eating ice cream). Criterion should be putting this on blu-ray. It should damned near be mandatory viewing. (I stumbled upon it while browsing the Starz app, and it's worth at least signing up for a free trial of Starz to watch this provocative piece of challenging art.)

Hearing an American film openly state that the political process is broken, maybe to the degree that it can't be fixed, is still electrifying and ballsy. The fact that this is all coming from Warren Beatty, a rich white dude who rose within the realm of classic Hollywood, is even more astounding. This is a bold, still shocking and biting satire that is still relevant and is darkly hilarious at the same time. I had seen this film around the time it first hit DVD, around the same time that I was seeing "The Phantom Menace" in theaters if I remember correctly. I was 21 and I thought it was bold but I didn't quite know what to make of it. To be honest, I still don't quite know what to make of it. It works better as a provocation than an actual film. There's not much of a story here and the film kind of runs frantically in circles with Beatty's Bulworth trying to avoid and call off the assassin he has hired (and whose identity he doesn't know) between public meltdowns. That stuff grows wearisome, to be honest, and his romance with Halle Berry doesn't entirely work (though Halle Berry is very good here, this is one of her strongest performances in my opinion). I do LOVE the Don Cheadle sub-plot however. He starts as a gang lord but I love seeing him watch Bulworth's speeches and spectacles and having his own outlook broadened. He's terrific here.

So is Beatty. His direction is strong and his central performance is riveting and revolutionary. It's a brave performance: a man in his sixties rapping and dressing in urban chic and saying some envelope-pushing political ideals and using slang that would no doubt get him "cancelled" in this day and age. If only for this performance, Beatty is a legend that doesn't get the appreciation he should, not really. I know that I haven't given him his proper appreciation, but that's changing as of now.