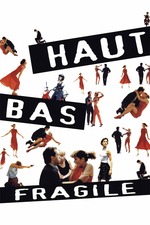 Haut Bas Fragile > A Woman is a Woman. The latter is only fancy-free on the surface; academic non-humor (a cinephile's nasty penchant for jokes only he'll understand), starchy frames, snark, and a misogyny that slowly morphs into misanthropy slow it down — Karina gives it speed. Meanwhile, on the other side of the Bank, Karina sings harmony to a slack melodic line in Jacques Rivette's Haut Bas Fragile. Nimbler, on its toes, it has (gasp! swoon!) JOY, a necessary element in any musical, no matter how deconstructive the effort. Haut Bas Fragile is defined by a prideful amateurishness, cute insipidness, a primitive camera whose only good function is capturing its subject's bodies (but rarely from a perfect-shot position à la Astaire-Rogers — and that's the point), a conspiracy plot that in typical Rivette fashion peters out into nothingness (just another dance on the ballroom with the MacGuffin papers). The male leads are blank as the white walls of Marianne Denicourt's hotel room; the female leads, punchy and suspicious and repetitive, a harkening back to Rivette's Celine and Julie days, with a bit of Daisies in a dead-gorgeous tribute to Chytilova's dick-snipping scene.

One of the infinite truths about this piece is the way in which it makes the viewer aware of their own relation to their environment, the bizarre way in which our emotions get externalized in brief Technicolor flashes of joy, anger, bitterness, jealousy, contempt. We see it when a loner librarian (Laurence Côte) goes to a music store to find the name of a song her birth mother sang to her; she hums a few bars to the Jean Pierre-Leaud-looking clerk, and for a hot second, the world grinds to a screeching halt; this is the feeling of love, but also of the desperate human impulse to solve a mystery (where is my mom?) that seems unsolvable. We see it in the casting of Anna Karina as the Smoke-ash Chanteuse of a mysterious club; she acts purely on the surface, yet inspires any scene she's in (a poker game where the bets keep escalating — Rivette gives us a taste of what Karina would have been like in Demy's Baie des Anges!). We see it whenever the players do modern-dance-like sashays in the air — before the music kicks us — clueing us in that they're about to express themselves freely, the musical orgasm is about to be initiated. The greatest moment, and the high melancholic point to this nutty banality, is when Denicourt and her would-be lover (a man hired by her father to track her post-coma moevements; he falls in love with her) slide and glide across her hotel balcony. You expect the music to kick in at any point, but sadly it never does. A true anticlimax that is felt. Needs a reissue, now. 169 minutes.