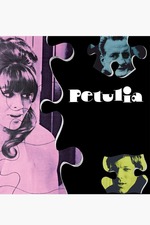 Richard Lester's Petulia gains in beauty, strength, and power the more ways you can see it: backwards, upside-down, watching scenes in piece-meal, on your phone, on your laptop, in 35mm, with friends, with family, by yourself, after a breakup, with your new partner. It's meant to be taken apart and put back together again, like each one of Lester's lost lovers: a wild woman, an insecure man, two hollow shells. It towers as a hallmark of depressing romances. Romance, but never romantic.

It is a uniquely told story. The first viewing you will feel confused and lost. That's how Lester wants you to feel. The editing is fragmented, the pieces are out of order. It starts in the middle of the breakup, with flashes forward to the bloody end, and flashes back to the torrid beginning. With each new exposure to Petulia, the mixed-time layers keep peeling off and off, like an onion with no center. At the core, instead, is a hole big enough to fill the souls of Petulia and Archie, a kook turned into a robot and a robot turned into a kook, respectively. They've bypassed each other, Demy-style, and ultimately end up further than where they started. The embrace of two loving hands becomes the cold, un-tender man's hand (Richard Chamberlain's) that slaps, abuses, rapes Woman. In Richard Lester's conception of the world, comic absurdity is integrally linked to tragic circumstance; the queasiness one feels is exactly how it is like to live a life of unfulfilled desires and hypocritical prettiness. It's the hell Archie escapes with Polo, but which he falls into again once he decides to leave Petulia (forever....?) It's the hell that Petulia finds when she sacrifices gentle wackiness (the new Archie) for abusive, patriarchal comfort (the same ol', same ol' David [Chamberlain]). The point is made again and again in Lester's film, as dense as Resnais or Varda or Malick or Bergman or Cassavetes. Flash-images are where the point is delicately made, without the hammering insistency of a bravura Roeg storm. (Ironic, considering Roeg himself is the immaculate DP for this picture, which I happened to catch in a gorgeous IB Technicolor print from 1968 at QT's New Beverly Cinema.)

The flash-images tell the "Incoherent Vice" story: Archie and Petulia passing each other on the San Francisco trolley, him in his drab brown mac, her in her psychedelically-colored miniskirt and shopping bags, each as dead to one another as the lovers at the end of Demy's Umbrellas of Cherbourg.

Petulia, beaten into a bloody pulp, whisked away on a stretcher as bystanders (mostly concerned, mostly thankful it wasn't them, some uncaring and making asinine jabs) comment upon the scene like vulgar art critics sniffing a Pollock they don't understand (and will never understand).

Janis Joplin and her band (Big Brother and the Holding Company) interrupting the soundtrack with loud, frizzed-out blasts of noise ("ROADBLOCK! ROADBLO--!"), a devastating reversal of the power of pop music at play in the fun-and-fancy-free Beatles romps (the only altogether optimistic films in the Lester oeuvre).

Polo, Archie's wife, a bag of cookies flung at her side, crashing and splinting into a million tiny fragments, her willingly rubbing in her new-found square beau in Archie's face, her with her understandable reasons (she needs to forget the pain Archie caused her), him with his understandably flummoxed response (what on earth did she expect coming over to Archie's place, a goddamn Rose Parade?) The lines she mutters to herself: "Go to hell" at Archie's sarcastic comments, "I hope she dies" when he ditches her and her sons at a roller-derby to inquire about the other woman's health. Seems melodramatic, but not in Lester's presentation of her: Yet another lost-soul stuck in the pop-culture muck of 1968 America. The Pepsi-Generation: a culture faced with the Vietnam War on TV when their closest conception of violence is through a James Cagney gangster flick, a place where "shopping churches" and suburban reflector houses abound, where a supermarket is the church of every town. A largely white city, one that fails the marginalized minority (in Lester's film, it's Mexicans and Latinos for a change), one that fails to understand where they're coming from. ("Cut it out, ya little spic!" a nurse yells at a young Mexican boy whose leg has been crushed by a Ford.) Communication breakdown, as in Lester's other disturbing masterworks of the 60s The Knack and How I Won the War, movies whose sense of moral outrage are cunningly disguised by outrageous piles of humor. Rarely any humor in the Petulia world; if there is humor, it's of a morbid kind.

Petulia never fails to leave me in tears in its stirring, hopeless finale. I hope to never reach the lower emotional depths of Petulia and Archie. And yet, I've a feeling I will. We all will, at some point in our love-lorn lives. Disillusion isn't the right word for it. It's Truth, plain and simple and cold.