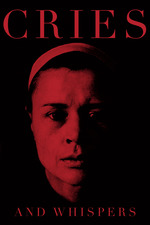 "It is early Monday morning...and I am in pain."

Meditative and teetering on the brink of death and reflection, Ingmar Bergman's 'Cries and Whispers' touches on death, regret, familial drama, hidden secrets and more in such a short, 91 minute runtime. It's almost perplexing how complex, cold and foreboding such a short period drama could be, but Bergman does so effortlessly, even if the film is a bit too heavy-handed in its themes and doesn't offer nearly enough runtime to explore these concepts.

Bergman was masterful at capturing raw emotion, physical pain and more on the faces of the actors he employed - it's instantly displayed in the opening of the film, as Agnes' face contorts and twists in pain, befuddlement, and a collection of other emotions we're not yet privy to. The camera lingers to take this all in, letting you know something's wrong through Andersson's incredible acting. Later, David's critique of Maria's changes in her facial features over the years reveals a litany of quickly changing expressions, both subtle and overt, from eager, sensual intrigue at his observations to shock over the calculating honesty of his assessment. It's powerful.

Despite the film's technical expertise and brilliant performances, 'Cries and Whispers' wasn't particularly inviting to me or gripping in its story - sure, it's relatable in its display of death and mourning during hospice care, but it's excessively grim with no real upbeat resolutions, despite a few superficial instances, and tends to drag when its intermittent flashback sequences are introduced at random intervals. Still, it's Bergman, so you know the visual presentations and acting are going to be absolutely award-winning and top notch, as evidenced here.