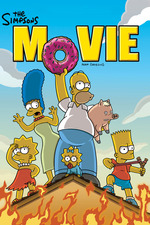 Obviously, it's not nearly as great as a Simpsons movie should've been, but I'm thankful it turned out good at all, considering not only how stale the show had gotten by this point, but also how laboured/questionable the writing process for this thing was.

For example, it's baffling to me how, for roughly two thirds of its development, the film was going to open with Marge writhing around in a fit of religious hysteria, rather than Grandpa. And that the writers somehow thought this would be a good idea and NOT an immediate buzzkill.

I can imagine there are about five, maybe six, cuts of this film that are way better than what we got, but it's more likely there are at least a hundred AWFUL, fucking unwatchable versions. So, all in all, I'll settle for the pretty alright film we ended up with.